The Lightning Framework manages the lifecycle of lightning web components, It is responsible for creation, insertion of components into the DOM and renders them and also removes them from the DOM. It also monitors the rendered components for any changes in the properties.

Lifecycle Hooks are callback methods that are triggered at a specific phase of a component instance’s lifecycle. A hook method tells us that something happened and it may or may not exist on the prototype chain. There are a total of 6 lifecycle hooks in LWC.

Let’s see the flow of lifecycle hooks execution by diagram given below: 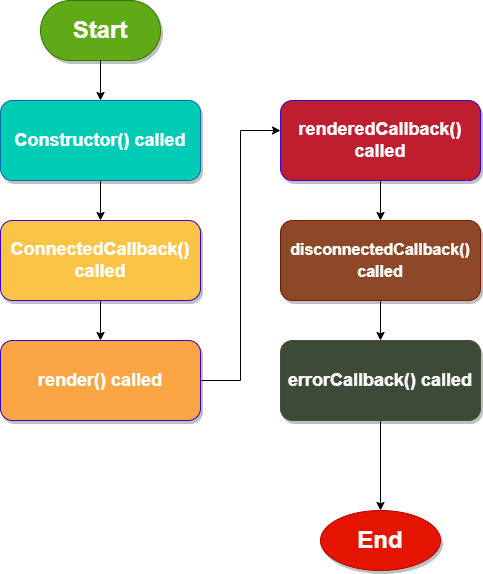 Let’s understand each of these lifecycle Hooks.

As a necessary step we need to call the super() keyword from constructor(). As every LWC component extends LightningElement  which has its constructor and we are not supposed to bypass calling the parent class’s constructor.

We can set values from the Constructor but the best practice is to get or set the value of the variable using the getter and setter method. Refer below given example to understand it better. 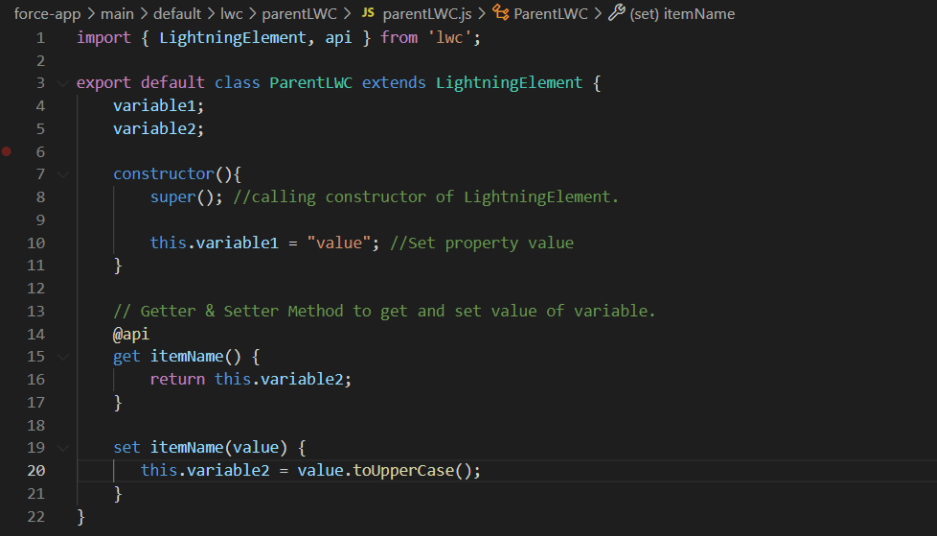 Here we are using getter and setter to get and set the value.

There are few Do’s and Don’t with constructor:

If we want to perform any kind of logic after the component gets loaded into DOM we can use connectedCallback() lifecycle method.

The flow of this method is from the parent component to the child component.

It gets executed after the connectedCallback method execution finishes, which overrides the standard rendering functionality of LWC. We can control the rendering process by conditionally rendering the template (html file) on the basis of business logic or a few conditions. It must return a valid html template file and this html file is rendered on the screen.

Technically speaking render() is not a lifecycle hook, it is a protected method on the LightningElement class.

The flow of this method is from the parent component to the child component.

Let’s see how conditional rendering works. We have one component named parentLWC, which contains 5 files in it: 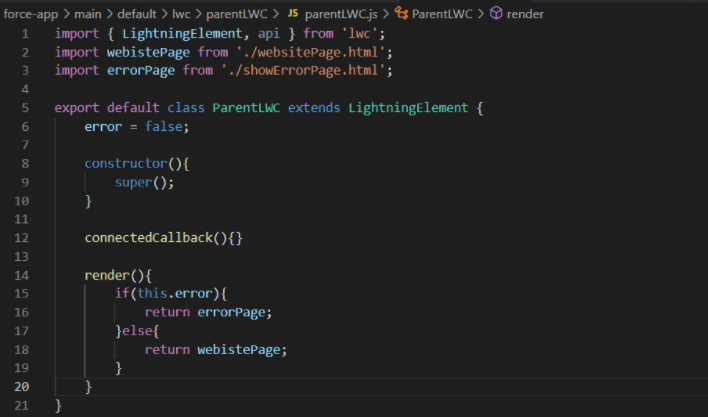 The value of property error was false, thus website.html get rendered

It gets executes after a component is completely rendered on screen. renderedCallback is unique to LWC and the rest are from HTML custom elements specification. It should be guarded with conditions that do not trigger an infinite rendering loop as this hook is called after every render of the component. A component is rerendered when the value of a property changes.

The flow of this method is from the child component to the parent component, meaning it follows a bottom to top approach. Below example shows how the renderedCallback() works.

Note: we are rendering the websitePage.html via render() hook. 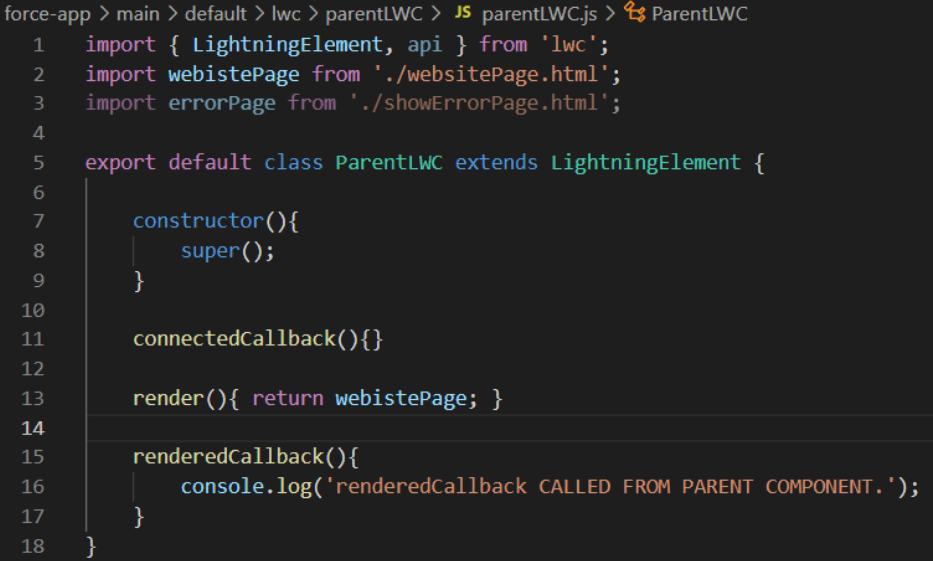 Thus, it is clear that the child component is rendered first then the parent component gets rendered.

renderedCallback() method is called multiple times which result in useless rendering of the page, to make sure that renderedCallback() is called only when it is required and for that we can use private boolean property. Its shown in following example:

Let’s say our component has subscribed to the Lightning message service(LMS) channel to receive data from another LWC, we can unsubscribe to this channel in disconnectedCallback(). It gets executed when failure or error is captured during the lifecycle phases in all the descendent components in the tree. It is unique to LWC and the rest are from HTML custom elements specification. By this hook we can have an error boundary to our component.  It helps us to log the stack information and render an alternative template if error is encounters in the child component. So that users can get the idea exactly what happened and what to do next.

It is similar to the javaScript catch{} block for components that throw errors in child component lifecycle hooks. Yes, the error boundary component catches errors only from the lifecycle hooks of the children component, and not from itself.

It takes two arguments: error and stack. error is a javaScript native error object and stack is a string.

Thankyou for reading so far. Also Visit this link to read a Blog on Basics of LWC.